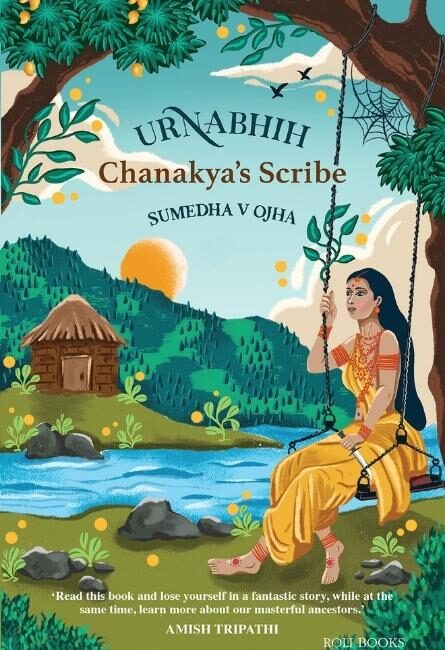 Misrakesi, Acharya Chanakya’s scribe in the Mauryan Palace, part of the royal administration; Misrakesi, with child, carrying the future Senapati of the Mauryans; Misrakesi, the new wife, trying to fit into one of the most powerful families in the kingdom while battling both assassins and more intimate threats to her own happiness with Pushyamitra. This is the new reality of the dancing girl from Ujjain, who had first come to this city of secrets with only revenge on her mind. In this sequel to Urnabhih, book one, Misrakesi finds herself vulnerable at the centre of a political chakravyuh. Her child, her husband, her family, and her very existence all seem to be pawns in an unseen but lethal game of power swirling around her.

Sumedha Verma Ojha, author, translator, columnist, speaker and cultural activist was born in Patna and went to school in Bihar and Jharkhand.

She studied at Delhi University and joined the Indian Civil Services in 1992 but switched careers after a sabbatical in 2006 and now writes, speaks and lectures across the world with a focus on Indian and US universities.

She is engaged in research on ancient Indian History, Sanskrit and Prakrit works with a focus on a gendered understanding of the past. Her books include the Urnabhih historical fiction series set in Mauryan India which has been picked up for turning into a movie and a 2016 translation of the Valmiki Ramayana.

She also works in the area of conservation of cultural heritage with a focus on the intangible heritage of oral traditions. The Los Angeles Library system has accredited her as an author and part of its South Asian outreach.

She contributes articles on history and culture to many newspapers and and also works as a media consultant providing inputs in ancient Indian history.

She lives in Geneva, Switzerland, with her husband.