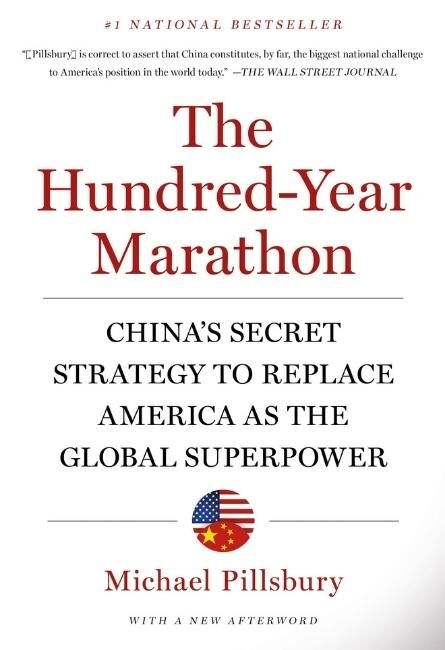 The Hundred-Year Marathon: China’s Secret Strategy to Replace America as the Global Superpower

#1 National bestseller "[pillsbury] is correct to assert that China constitutes, by far, the biggest National challenge to America's position in the world today."-The wall Street Journal for more than forty years, the United States has reached out to China, helping it develop a booming economy and take its place on the world stage, in the belief that there is little to fear-and everything to gain-from China's rise. But what if the Chinese have had a different plan all along? The hundred-year marathon reveals China's secret strategy to supplant the United States as the world's dominant power, and to do so by 2049, The one hundredth anniversary of the founding of the people's Republic. Michael pillsbury, who has served in senior National security positions in the U.S. Government since the days of Richard Nixon and Henry Kissinger, draws on Chinese documents, speeches, and books (many of them never translated into English) to reveal the roots of this strategy in traditional Chinese statecraft and track how the Chinese are putting it into practice today. Pillsbury shows how American policy make Rs have been wilfully blind to these developments for decades--and he includes himself in that critique, as he was once a leading voice in favour of aiding China. He also calls for the United States to design a new, more competitive strategy toward China as it really is, and not as we might wish it to be. Now featuring a new afterword, the hundred-year marathon is a wakeup call for all Americans concerned about how we have misread the greatest National security challenge of the twenty-first century.

Michael Pillsbury is the director of the Center on Chinese Strategy at the Hudson Institute and has served in eight presidential administrations. Educated at Stanford and Columbia, he was an analyst at the RAND Corporation and a research fellow at Harvard and has held senior positions in the Defense Department and on the staff of four U.S. Senate committees. He is a member of the Council on Foreign Relations and the International Institute for Strategic Studies. He lives in Washington, D.C.