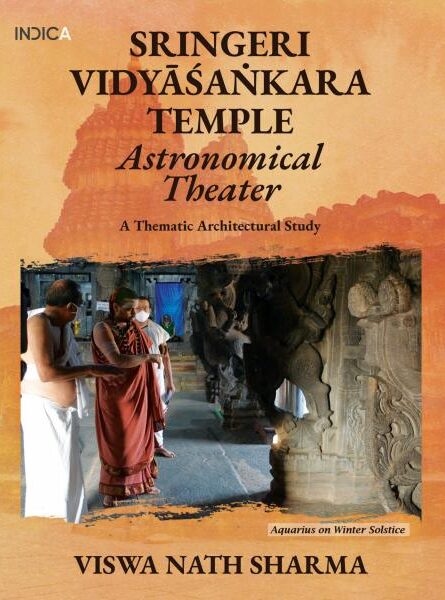 An astronomical theater with twelve zodiac pillars having a zodiac sign carved on them is the Navaraṅga of the Vidyāśaṅkara Temple at Sringeri, a town established by Shankaracharya. The pillars are illuminated each month, causing observers to conjecture that the illumination patterns represent a calendar. Scientific studies at the temple have not been able to resolve the issue.

The present work reveals with scriptural support that the Vidyāśaṅkara temple is a Sun Temple unique in India and the world. It reveals many intriguing secrets of Sanātana Dharma (Hinduism) and its astronomy as narrated by the architecture. It shows how well Veda, Vedanta, Vedāṅga Jyotiṣa (astrology), Yoga, Vāstu Shāstra, Āgama (canons of temple culture) and Tantra (esoteric doctrines of religious practice) are harmoniously blended in the construction of the Vidyāśaṅkara temple.

The book provides captivating foundational facts like the religious purpose of the temples; how the grand temple architectures are designed to meet stated purposes; how to understand the biological basis of Hindu Astronomy, Ayurveda, Astrology, Festivals and Yoga of the Sanātana Dharma civilization and many more cultural aspects.

Viswa N Sharma, born and brought up in Karnataka, is a retired Electronics Engineer settled in the greater Houston area, USA. He worked in the computer and communication systems and power conversion inversion architectures and has registered over twenty-five patents. He researches Sanātana Dharma to immerse himself in his heritage as it is and to provide objective evidence of its fundamental constructs. He has been a practicing Kriya Yoga initiate for over twenty-five years. He has published, in Kannada, literary criticism from a yogic view of D.R. Bendre’s poems. He is a co-author of Vedic & Yogic Heritage Festivals of Bharata, an English translation of the Kannada edition of Swami Sri Rangapriya’s book.