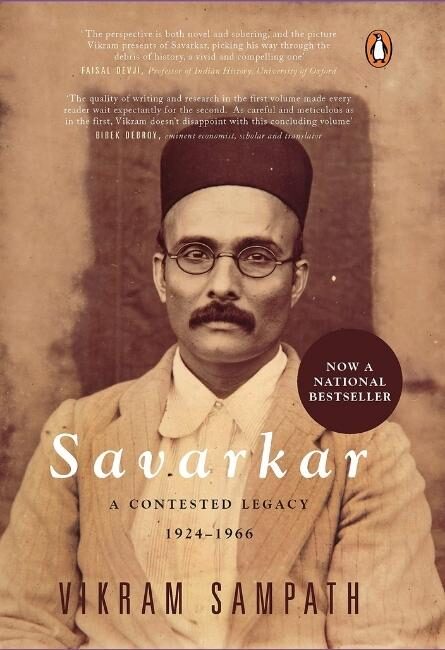 Was Savarkar really a co-conspirator in the Gandhi murder?Was there a pogrom against a particular community after Gandhi's assassination?Decades after his death, Vinayak Damodar Savarkar continues to uniquely influence India's political scenario. An optimistic advocate of Hindu-Muslim unity in his treatise on the 1857 War of Independence, what was it that transformed him into a proponent of 'Hindutva'? A former president of the All-India Hindu Mahasabha, Savarkar was a severe critic of the Congress's appeasement politics. After Gandhi's murder, Savarkar was charged as a co-conspirator in the assassination. While he was acquitted by the court, Savarkar is still alleged to have played a role in Gandhi's assassination, a topic that is often discussed and debated. In this concluding volume of the Savarkar series, exploring a vast range of original archival documents from across India and outside it, in English and several Indian languages, historian Vikram Sampath brings to light the life and works of Vinayak Damodar Savarkar, one of the most contentious political thinkers and leaders of the twentieth century.

Bangalore based historian, Dr. Vikram Sampath is the author of five acclaimed books: Splendours of Royal Mysore: the Untold Story of the Wodeyars; My Name Is Gauhar Jaan: The Life and Times of a Musician; Voice of the Veena: S Balachander: A Biography. His latest books are the two-volume biography: Savarkar: Echoes from a Forgotten Past and Savarkar: A Contested Legacy, 1924-1966 from Penguin Random House India. Both the voulmes had gone on to become ‘National Best Sellers’. Vikram was awarded the Sahitya Akademi’s first Yuva Puraskar in English literature and the ARSC International Award for Excellence in Historical research in New York for his book on Gauhar Jaan. The book has also been adapted to theatre as a play Gauhar by Lillette Dubey and is being adapted to a Bollywood film by Ashutosh Gowariker. Vikram was among the 4 writers and artists to be selected as a Writer-in-Residence at the Rashtrapati Bhawan in 2015. Vikram has a doctorate in history & music from the University of Queensland, Australia and was a Senior Research Fellow at the Nehru Memorial Museum and Library, New Delhi. He is also an Aspen Global Leadership Fellow and an Eisenhower Global Fellow 2021. An Engineer/mathematician from BITS-Pilani and an MBA in Finance from S. P. Jain, Mumbai, Vikram is also a trained Carnatic vocalist. He has established the Archive of Indian Music, India’s first digital sound archive for vintage recordings, is the Founder-Director of the Bangalore Literature Festival, and curates the ZEE Group’s ‘ARTH-A Culture Fest’.