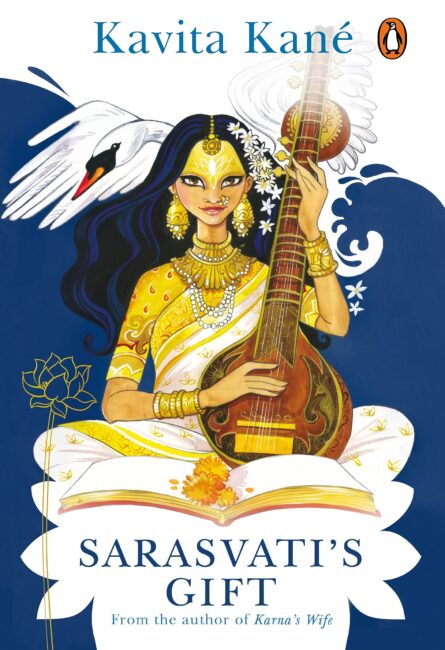 Sarasvati, the feminine force worshipped as the goddess of learning, is a household name, yet we barely know much about the goddess. She is known as a lost river and seen as a singular goddess, never as part of a couple, such as Shiva-Parvati or Lakshmi-Narayan. In Sarasvati's Gift, Kavita Kane brings to light Sarasvati's story-the goddess of art, music and knowledge-told in the voices of nameless celestials, powerful gods and lesser mortals. The book explores her relationship with her Creator, Brahma, and their unusual marriage-a union of fiercely independent minds and the most non-conforming, unconventional of the Triumvirate couples. As these peripheral figures and silent catalysts take centre stage, we get a glimpse of an extraordinary woman and her remarkable story, obscured and buried under myths and legends.

A senior journalist with a career of over two decades, Kavita Kané is a full time author of the best-sellers Karna’s Wife, Sita’s Sister, Menaka’s Choice , Lanka’s Princess ; all of them on marginalised characters whom she finds especially fascinating.

Besides writing – which is the only métier she knows- she is passionate about cinema and theatre. Born in Mumbai, a childhood spent largely in Patna and Delhi , she happily settled in Pune with her mariner husband, two teenaged daughters and Chic the spaniel and Cotton the curious cat.