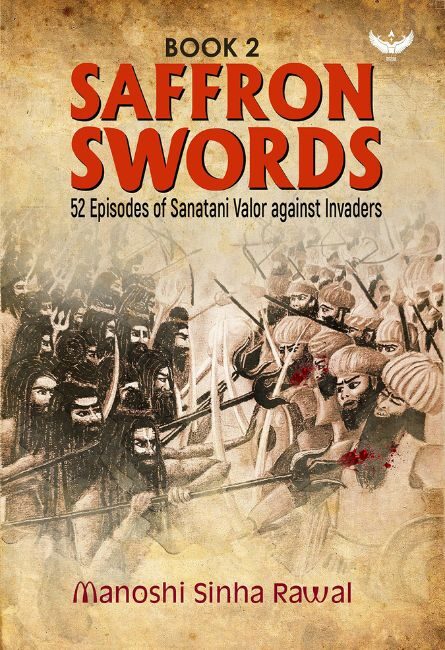 A one-sided, biased, and distorted historical narrative has been fed to us for decades, projected our warrior ancestors as losers and as ‘defeated’. Lakhs of warriors from across India put up a brave resistance against invaders since the 8 th century. Marcus Garvey, a Jamaica-born political leader and social activist rightly said, “A people without knowledge of their past history, origin and culture is like a tree without roots.” Continuing on the roaring success of the inaugural volume of Saffron Swords, which chronicles 52 stories of immensely brave and determined resistance put up by unsung men and women, Saffron Swords (Book-2) brings to the readers, 52 more such untold episodes of Indic resistance to invaders, from 8 th century to independence.

Manoshi Sinha is the author of several books, including the ‘Saffron Swords’ series. A postgraduate in English Literature from Pune University, she is from Assam. She is an independent Researcher on Indian History and ancient Temples. She is the founder of myindiamyglory.com, an emagazine that presents Bharat from ancient to present with special focus on History and heritage. Also a blogger, she has interviewed a few freedom fighters. Prior to her present stint, she worked as an Editor in leading publication houses. Together, along with her husband Yogaditya Singh Rawal, a history and fitness blogger, Mr. India 2016 (Federation CupBodybuilding), an ancient martial art learner/practitioner, Manoshi Sinha has been exploring historical places, ancient and medieval temples, forts and fortresses to unearth information about India’s past glorious history. Most of the episodes of ‘Saffron Swords’ are based on the husband-wife duo’s research visits across India.