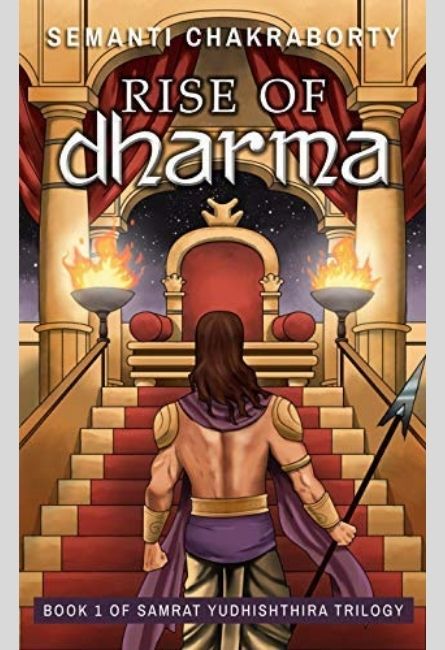 Losing father in young years and growing within conspiracies of cousins with a threat on life would make any other person curse his fate. But prince Yudhishthira sees his responsibility to bring a change to the fates of many. He struggles to make his father’s land a realm of justice, which costs him severely.
Sent away from his homeland, thrown into a murder attempt, moving in disguise in land of cannibals, - can Yudhishthira make Dharma rise again in a broken Bharatavarsha?

After majoring in Physics, Semanti Chakraborty turned to her area of passion – The Mahabharata. She hopes to revive and rekindle interest in the knowledge of Bhagavan Vyasa through her reimagination of the story of Yudhishthira. A teacher by profession and a writer by passion, she balances between science and spiritual wisdom in her daily life.
Rise of Dharma is her debut novel and is to be followed by two more books, titled “Trials of Dharma” and “Triumph of Dharma” respectively, in Samrat Yudhishthira series. Apart from this trilogy, she also has plans to write on some underrated epic characters in future. She can be reached at her twitter handle @Semanti_C and at scalbarosa@gmail.com.