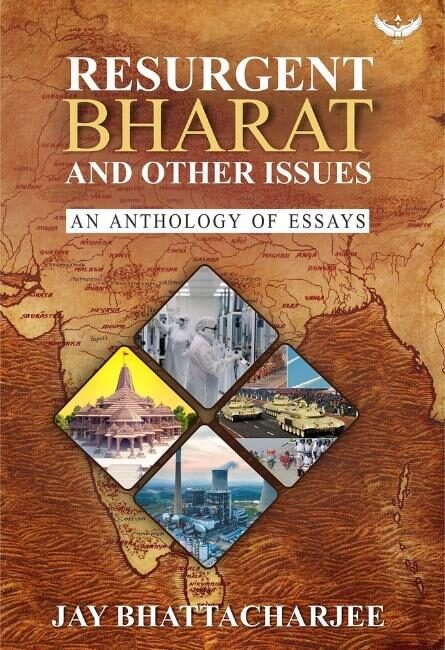 Resurgent Bharat and Other Issues: An Anthology of Essays

Resurgent Bharat and Other Issues: An Anthology of Essays by Jay Bhattacharjee is a collection of essays published over a period of more than two decades in different newspapers like The Pioneer, The New Indian Express, The Business Standard; magazines like India Defence Review, besides various online portals, including Swarajya and NITI Central. These essays cover a wide-ranging of topics including India’s civilisation and culture, politics, issues related to national security and neglect of the Indian soldiers by the establishment, corporate governance; and, humour and satire. The essays, written with historical references and parallels and unwaveringly sticking to the nationalistic perspective, without mincing words, are a wake-up call to all those wishing to see India back at the top, with its ancient glory and heritage restored. “There are cogent reasons for putting together the diverse writings that this book contains. The first one is that our country that happens to be one of this planet’s oldest surviving civilisations is also a young political entity, compared to many other nation-states in the world… There are grave existential threats that it confronts. Minimising these dangers would amount to burying our collective heads under the sand,” says the author.

JAY BHATTACHARJEE was born in Mumbai (or Bombay, as it was then) in 1946. He spent his initial and later years in the western metropolis, as well as in Kolkata (Calcutta) and Delhi. He did his B.A. in Economics from Presidency College, Calcutta, followed by a postgraduate degree in Economics and Sociology from Cambridge University (Christ’s College). Returning to India, he taught at the IIT, Delhi, before moving to the corporate world. He is a Fellow of the Institute of Company Secretaries of India.

In his corporate career, he has worked in a number of corporations and financial institutions, including Tatas, Grindlays Bank and Dalmias. He started his own consultancy practice in the early 90s and also ran a broking company as a Member of the Delhi Stock Exchange. He started writing for the media in the early 90s, and also appeared in TV programmes on economic and business matters.  His life-long interest in Indic civilisation was inspired by both his parents, while his own work-experience led him to study how India could reclaim its earlier greatness by overhauling the entire governance and administrative structures. This anthology of essays covers his diverse areas of interest.