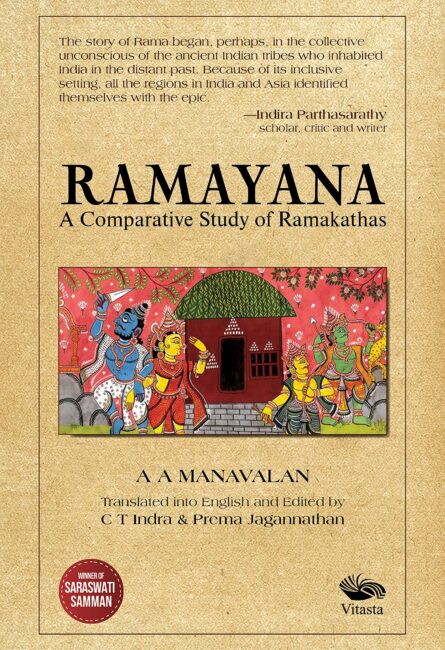 Ramayana: A Comparative Study of Ramakathas

The story of Rama has been a part of our lives for ever and will probably continue to be so…. But most of us are unaware that the story has as many variations as there are versions. In the author’s own words Valmiki’s Ramayana has taken several ‘incarnations’ due to the efforts of many great writers who wanted to bring the story to their own people in their own language. In his book, Professor AA Manavalan, an eminent scholar in the field of comparative literature, has painstakingly made an intensive and analytical study of the Rama story in 48 languages including the folk tradition. Professor Manavalan’s main focus is on how the receiving language’s rendering could make a greater impact than the original in the popular imagination of the people. Ramayana - A Comparative Study of Ramakathas, an English rendition of Ramakaathaiyum Ramayanangalum, presented by CT Indra and Prema Jagannathan, captures the thematic purpose of Prof AA Manavalan’s Tamil original and creates a forum ‘to discuss whether Ramayana is an ethical text or an ideological text’.

A.A. Manavalan, former head of the department of Tamil, Madras University, who died on Saturday, was a scholar of comparative literature and the proponent of the theory of ‘counter-influence’ in literature. He was one of two winners of the Saraswati Samman from Tamil Nadu.

He studied both Tamil and English and obtained a doctorate in English Literature from the Madras University.

It won him the Saraswati Samman, set up by the K.K. Birla Foundation.

“He proposed the theory of counter-influence and argued that Kambaramayana influenced Ramayana in other languages and later editions of Valmiki’s work,” said writer Perumal Murugan, who was a student of Manavanan, and studied in the department for eight years.