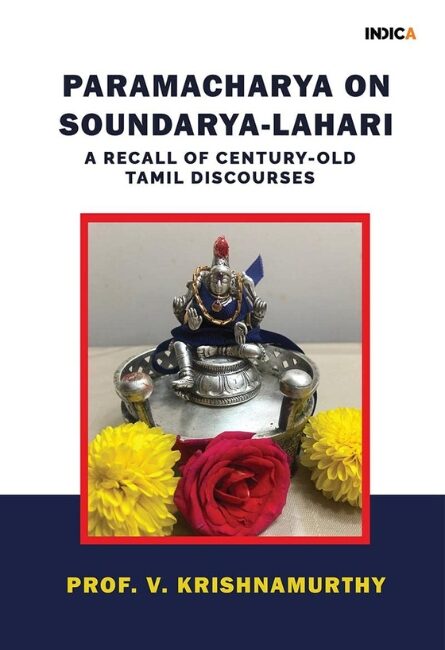 Sri Chandrasekharendra Saraswathi MahaSwamigal (born as Swaminatha Sharma 1894 – siddhi as Kanchi Paramacharya 1994) lectured on Soundaryalahari in the first quarter of the last century. Ra.Ganapathy, one of his ardent students, recorded and published them as a voluminous tome of 700 pages in the sixth volume of ‘Deivathin Kural’. These Tamil lectures have now been condensed, translated into English and published herein. The exposition style here is one where it resembles a direct English lecture by Paramacharya himself. The subject has been dealt in great depth by the Paramacharya and thus requires the reader to approach this translation as a study book rather than one for light reading.

V. Krishnamurthy (b.1927) was a professor of mathematics for four decades and an author of several books in mathematics. Since his retirement as the deputy director of BITS, Pilani, in 1988, he has been writing on spiritual matters and has also given numerous discourses on religious topics to Indian as well as foreign audiences. He has to his credit more than a dozen books on Hinduism and spirituality, the latest two being Thus Spake Krishna and A Primer of Spirituality.

His website www.profvk.com contains a large variety of highly read articles on Hinduism, covering fundamentals, bhakti, jnana, Vedanta, science and spirituality, translations of Sanskrit and Tamil philosophical works and also videos of his lectures through YouTube. The precision, clarity and irresistible appeal to the modern mind in all his writings and speeches go back to a rich experience as a successful communicator of mathematics during his professional life and also the spiritual training that was received from his father from early childhood. He is a recipient of half a dozen awards and honours, the latest being a Grateful 2 Gurus award by the Indic Academy.