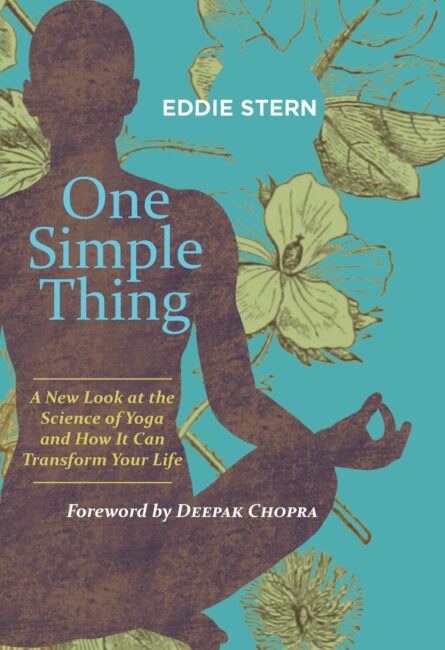 Harness the power of yoga to transform your life.

Yoga was created as a science for liberation, but in modern times it is used by many to improve physical and mental health, helping us become more productive at work, more caring in relationships, more responsible contributors to society, and better inhabitants of this planet. How does yoga accomplish all that?

Believe it or not, the answers lie in how the human body and mind function. Eddie Stern’s One Simple Thing explains from both a yogic and a scientific perspective how the human nervous system is wired. It describes the mechanics taking place beneath the surface of our bodies and shows how we can consciously use yogic practices to direct and change our lives in positive ways.

Drawing on modern neuroscience, ancient wisdom, and decades of practice and teaching, Eddie Stern reveals how what we do – from diet to chanting, from postures to meditation, from ethical practices to breathing techniques – affects who we become, and how a steady routine of activities and attitudes can transform our bodies, our brain functions, our emotions, and our experience of life.

Eddie Stern is a yoga teacher, author, and lecturer from New York City. He is known for his multi-disciplinary approach to furthering education and access to yoga, as well as his teaching expertise in Ashtanga Yoga. He recently released his first solo book, One Simple Thing: A New Look at the Science of Yoga, which examines in clear and simple language the underlying neurophysiological mechanisms that make yoga an effective practice. He is the co-founder of the international Yoga and Science Conference, which bring together researchers, doctors, healthcare workers, and yoga practitioners to learn about the latest developments in yoga and meditation research. Eddie is also the co-creator of The Breathing App which guides the user in a paced breathing exercise that balances the branches of the autonomic nervous system. The Breathing App is a simple, effective tool that has been shown to be helpful in reducing stress, improving sleep, and creating deep states of calm and balance in the user. He has been participating in scientific research on yoga since 2010.