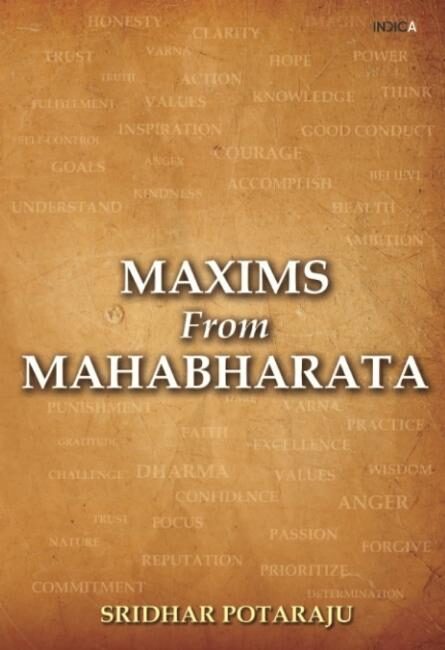 Maxims from Mahabharata, as the name suggests, is a compilation of Sanskrit Slokas sourced from the Mahabharata in Devanagari script with English transliteration and Bhavartha or gist of the maxim in English by the author. The maxims have been arranged based on the broad subject they deal with, such as dharma, faith, eternal values of life, mental health, truth etc. Each maxim is preceded by a narration of the context in the epic with a brief introduction to the characters.

Mahabharata is an encyclopedia of everything conceivable by a human mind. This epic touches upon nuances of human life, relationship with the creator, society, nature and with one’s own self. Several lessons of life are there to be discovered in the 18 Parvas in which it is narrated. Most valuable lessons of life are always learnt in difficult times. The protagonists in this epic face several humiliations and insults which appear to be difficult to overcome. In times of such despair, several truths about life are spoken to these protagonists by wise men and women. A few of such pearls of wisdom have been brought together in this book. Mental health is the biggest challenge faced by humanity. With the invasion of technology into human relations, loneliness, despair and depression are the most often spoken about topics. This book seeks to introduce readers to the hidden treasures of wisdom and knowledge in the epic, which has greater relevance in the present day. It can be a handy reference to know and understand life’s various realities and learn from the lived experience of the protagonists in this epic.

Mr. Sridhar Potaraju, hails from Hyderabad, India where he spent his childhood and formative years. Upon completing B.Com (Hons) from Hyderabad, Mr. Sridhar Potaraju was admitted into CLC, University of Delhi in the year 1994. Upon completion of LL.B degree in 1997, he enrolled himself as an Advocate with the Delhi Bar Council in 1997 and is practicing before the Hon’ble Supreme Court of India for more than 2 decades. He has a penchant for reading and learning about the ancient Indian Texts and spends his leisure time in research and reading. He has interests in reading Itihasas like Ramayana and Mahabharata and applying the values and wisdom contained therein in modern context. Professional and Personal inclinations for research blended in bringing contextually relevant portions of our Itihasas and Indian literature into the case material filed before the Courts in cases in which it was appropriate. He was a core member of the legal team for Sri Ramlalla Virajman, the Plaintiff in the Sri Ramjanmabhoomi case before the Hon’ble Supreme Court. His contribution in the case apart from Legal issues was also by way of research from Itihasas and Puranas from his personal library.