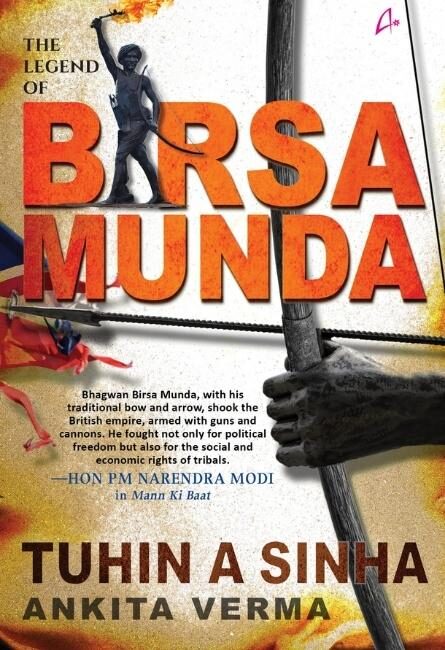 In 19th century India, deep in the heart of what is now the state of Jharkhand, the Adivasis have been leading a life of absolute misery and darkness. The colonial state, with the help of its scheming local collaborators, has cast a net of abuse and exploitation that is tightening around these Adivasis, much like a hangman’s noose does. Everything they hold dear – their land, homes, history, traditions, religion, families – has fallen victim to the grand colonial plan of building a magnificent but merciless empire for the Queen. However, when a people are all but crushed into dust and their identities threatened with a complete erasure, they erupt like a hot, angry whiplash of fire with a roaring so loud that it reverberates in the very heart of the empire and sends a frisson of fear up the spines of those in power. A fire that stokes a rebellion. And at the heart of this rebellion is the twenty-five-year-old Birsa Munda. He decides what must be done to save his community and leads the Adivasis in fighting back to reclaim their lives. A lion-hearted warrior. Healer. Spiritual guide. A forgotten hero. Based on true events, this epic tale of courage is a tribute to the life of Birsa Munda, who in his very short life, mobilized the tribal community, rebelled against forced conversions, envisioned a fairer, more just society and died fighting for it. A thrilling account that chronicles what most history books don’t mention, The Legend of Birsa Munda is the story of a subaltern tribal hero, whose contribution to India’s struggle for independence must never be forgotten.

Tuhin A. Sinha is a best-selling author​, columnist, content strategist and politician.

Tuhin has studied in Loyola School, Jamshedpur and Hindu College, Delhi before doing his Post Graduate Diploma in Advertising and Communications Management (PGDACM) from the National Institute of Advertising, (NIA), New Delhi.

Tuhin is acknowledged among the most prolific Indian writers with a maverick knack to experiment with new genres. While his first book, That Thing Called Love (2006) was an offbeat romance, The Captain(2008) was a cricket thriller that explored the underbelly of modern cricket. Of Love And Politics(2010) was a political thriller. His fourth and fifth books The Edge Of Desire (2012) and its sequel, The Edge of Power (2013) can be called socio-political thrillers. Daddy (2014) ​ was Tuhin’s sixth book and his first non-fiction narrative. Daddy is India’s first parenting book from a Dad’s perspective and celebrates new age fatherhood. Tuhin’s latest book, Let The Reason Be Love (2015) was again an offbeat romance. ​

Other than his novels, Tuhin has co-authored the book India Aspires with Union Minister for Road Transport, Highways and Shipping​, Nitin Gadkari. The book brings forth some very innovative development ideas and espouses increased production of bio-fuel and solar energy as means to improve the country’s rural economy. At present Tuhin, as a special initiatives advisor to Shri Gadkari’s ministries, is aiding the Hon Minister on some key initiatives concerning his ministries with the objective of enhancing public perception of the same.

Tuhin was a Grand Jury member for the prestigious Mahindra Transport Excellence Awards, 2016.

Tuhin has also been a screenwriter of several popular TV shows, Yeh Rishta Kya Kehlata Hai, being one of them, which is co-wrote in 2011-12.

Apart from his fiction novels and scripts, Tuhin is a keen political observer and activist.

Tuhin’s columns on Indian politics appear regularly in India’s leading dailies. Tuhin has a regular blog on ibnlive.com and dailyo.in He also appears frequently on news channels on political discussions.

​Tuhin has also been a creative consultant and content strategist, with one of India’s premier media companies, Reliance Broadcast Network Ltd. He wrote and narrated a popular social empowerment radio series, called “Misaal” which was broadcast on the BigFM stations of Jharkhand and Bihar.