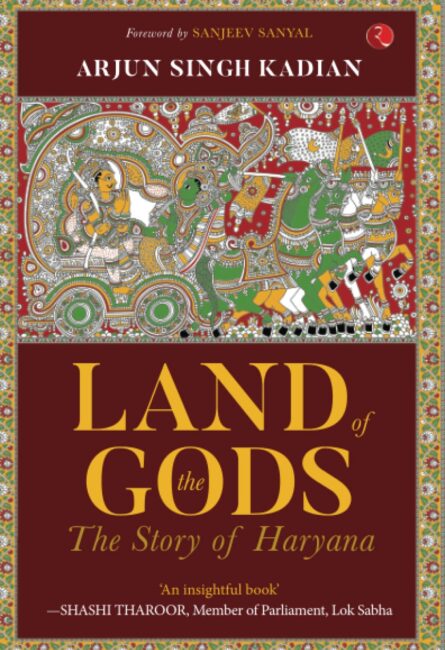 Land of the Gods

An ambitious book that engages with a region and people who have defined the subcontinent for over five millennia.

The great war of right versus wrong was fought here. It was from this land that Lord Krishna’s wisdom—the universal truth—spread across the globe. It is the cradle of the ancient Indus-Saraswati civilization, with the sacred river Saraswati, glorified in the Rig Veda, flowing in its full might across the plains and onward.

Kings and emperors used this place to expand and consolidate their empires. The East India Company, and later the British Crown, played their games here, manipulating and managing their colonial affairs. The much-ridiculed ‘Aaya Ram, Gaya Ram’ political epithet originated here. This land gave the nation a number of stalwarts of the Independence movement. And, it became the address for a cocktail of regional and national political manoeuvrings, impacting national politics in major ways.

In his debut book, Land of the Gods: The Story of Haryana, Arjun Singh Kadian takes the readers through a fascinating journey of Haryana which offers new insights and delightful nuggets.

An academic by profession Arjun Singh Kadian takes classes on stratigraphy, geomorphology and palaeontology. In the last two years, he has been spearheading the work of Rashtriya Uchchattar Shiksha Abhiyan (RUSA) for Higher Education at the grassroots level. His academic research includes climate, vertebrates, fluvial patterns and the river Saraswati. Passionate about history and culture, he documents stories from India’s geographical past and works to bring life and essence to them. He is also associated with different Indic projects and has spoken about Indic issues on different platforms. He is associated with the Saraswati Research Center, Kurukshetra, and has been giving inputs to state governments on research focus and direction, in an advisory capacity.