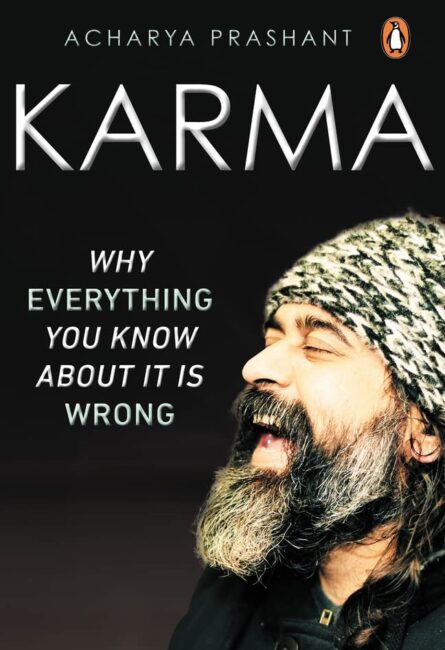 The meaning of Karma stands distorted by centuries of misplaced fictionalization. Karma remains a disquieting enigma to the few who refuse to accept compromised notions. This book is for them.

If to live rightly is to act rightly, what then is right action? This has tormented us since ages. The scriptures answer this, but without stooping from their cryptic heights. Nor do they advise how their ancient words apply to the present. Acharya Prashant's work provides the missing link. He imparts clarity, leaving nothing to conjecture or belief.

The book demolishes the myths surrounding action and decision by bringing to focus the actor, rather than action. When we ask, 'What to do?', the book handholds us into 'Who is the doer? What does he want from the deed?' This shift provides the solutions, and finally the dissolution of the question.

Acharya Prashant demolishes ubiquitous beliefs and outdated notions to reveal some simple truths. If you can challenge the tyrannies of tradition and greet the naked truth, you will love this book.

A prodigious child and academically extraordinary since childhood, his journey took him through technical and management education at Indian Institute of Technology (IIT), Delhi and Indian Institute of Management (IIM), Ahmedabad. With the yards of the best of corporate enterprises inviting him, he worked as a management professional for a few years in diverse industries. He was doing great professionally, as is expected of someone of his pedigree. But no matter how lucrative the affairs of the world are, they hold little importance when the Truth beckons. Something of the beyond was craving to find expression through the young man. A mystical and spiritual urge led to the formation of Advait Life-Education when he was 28, with a vision of bringing to people an inner clarity which is so obvious, so present, and yet missing from their lives.

Around the age of 30, Acharya Prashant started speaking publicly in the form of public discourses, followed by open discussions. Soon it started becoming clear that these sessions were deeply meditative, brought the mind to a strange peace, and had a miraculously curative effect upon the psyche of the listeners. Acharya Prashant’s voice and videos would be recorded and uploaded on the internet.

Around the same time, he started leading Self-awareness camps. He would take true seekers with him to the Himalayas, in groups of around 30 each. Five uninterrupted days of closeness to him and his magical discourses would bring the seekers a peace that is otherwise rare. Besides speaking directly on various aspects of life, Acharya Ji would discourse on spiritual texts, and masters, from across the world and across the ages. Today, thirty three such camps have been organised, and they have turned out to be deeply transformational, providing immense clarity and peace to seekers from all across the world.

With the fire of intelligence and clarity spreading across the world via the words of Acharya Ji, soon the PrashantAdvait Foundation was formed as a vehicle of self-clarity based on meditative understanding and scriptures like Advait Vedanta, with the vision of “Creation of a new humanity through intelligent Spirituality”.

Acharya has been rigorously involved in delivering discourses on basic existentials like Love, Fear, Death, Greed, Jealousy, Ambition, etc. In general, he relishes speaking on Vedantic literature and his discourses have references to saints and philosophies and wisdom texts from all times and places. His distinguishing feature is his ability to render lucidity to some highly philosophical texts and present them effectively even to a beginners’ audience. He harmonises the ancient with the modern, the dogmatic with the scientific, the philosophical with the simple, and the profound with the profane, and he epitomizes a ‘modern Saint’. Not only the style of his talks but also their methodology is such that the listener establishes an instant connection and experiences a delight in the process of listening.

Acharya Prashant’s unique spiritual literature is at par with the highest words that mankind has ever known. Seekers visit or connect with him from all over the world through his discourses on various life-topics, self-awareness activities, learning camps, and one-to-one meetings. Besides speaking in cities in various parts of India, Acharya ji has conducted extensive lecture tours in various countries of Europe. International audiences travel to India especially to meet him. There is a clarity that radiates from his presence and a soothing effect from his being. His style is forthright, clear, mystical and compassionate. He plays with his audiences – taking them to the very depths of meditative silence, laughing, joking, attacking, explaining.

Acharya Ji’s talks and writings, spanning over a decade now, exceed 3000 in number and are made available on his two YouTube channels and are regularly published on the content site of the Foundation. To all seekers around the world, this content has been made freely available. The thousands of videos and articles uploaded by him on the internet are precious spiritual resources, freely available to all those who seek them. Personally too, he is ever open to meeting sincere seekers of Truth.