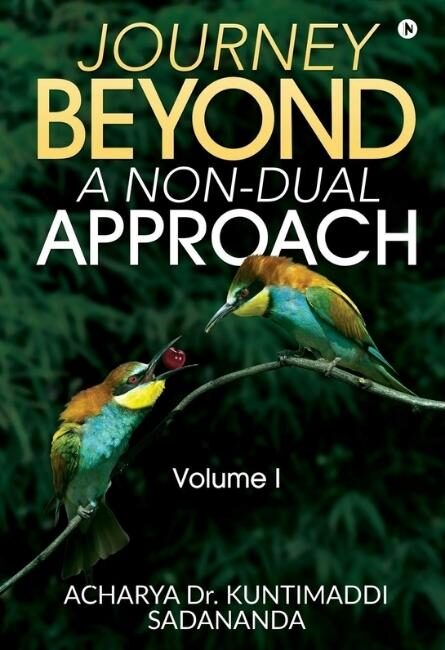 Journey Beyond A Non-Dual Approach

In this book Sadaji encapsulates the wisdom of Advaita Vedanta following the teachings of his Guru, Sri Gurudev Swami Chinmayandaji.

The introduction to the book is written by Dr K Aravinda Rao, former DGP and a scholar and author of Advaita who commends – “The book presents a panoramic picture of seekers from different cultural, social and intellectual backgrounds. There are answers to different levels of students. Sometimes the student is a novice, sometimes experienced or argumentative or sometimes confused. Dr Sadananda however, has untangled such confusion and has given replies.”

In his foreword, Swami Dheerananda of Chinmaya Mission Washington Regional Centre writes –  “The author elaborated on the practical ways to approach ultimate awakening through Attentive Listening (Shravana), Active Reflection (Manana) and Meditation (Nididhyasana). This book provides a means for Nididhyasana-contemplation upon the Truth”.

The book covers a wide compendium of spiritual knowledge, written in a simple and lucid manner that would appeal to both students and scholars alike. Indic Academy is pleased to publish this book.

The book will be launched by Swami Advayananda ji at the inaugural session of the forthcoming conference on Oneness being organised by Indic Academy and Chinmaya Vishwa Vidyapeeth on 15th October 2019.

Indic Academy has recently launched a publication division. This book is the 7th title to be published.

An extract from the book is reproduced below :

When the shoe fits, the foot is forgotten;

When the belt fits, the waist is forgotten;

When all things are in harmony, the ego is forgotten.

Of what use then are your austerities?

Sadananda: Austerities are there to make sure that the shoe fits the foot, the belt fits the waist, and everything is in harmony so that ego can be forgotten! Until then austerities help!

Sadananda: True. Here, inaction does not mean that there is no action.

The sage will be acting more dynamically and efficiently than any egocentric person. At the same time he will not have the notion that he is the actor. He does not act, but action goes on efficiently through him. Krishna says, “yogaH karmasu koushhalam” − “Dexterity in action is yoga.”

Q: But the saint knew nothing of this because the attention of people was so centered on the shadow that they forgot about the man. So his wish that good be done through him and that he be forgotten was abundantly fulfilled.

Sadananda: Beautiful story. Reminds me of the story of Bhagavan Ramana Maharshi. A lot of miracles were attributed to his presence, but he knew nothing of those.

Dr. K. Sadananda is a Material Scientist by profession, and worked at the United States Naval Research Laboratory as Head of Deformation and Fracture published extensively in Science, and received many awards.

He retired in 2005, and now works as a private consultant in the United States for six months of the year. He was also a visiting professor at the Indian Institute of Technology, Madras.

He is a disciple of Swami Chinmayanandaji, was a founding trustee of the Chinmaya Mission’s Washington Regional Center as well as Shree Siva Vishnu Temple, Maryland, USA. He served as Secretary and Treasurer of SEVA, Inc., a philanthropic organization formed around 1980 by Chinmaya Mission, to fund projects in India and elsewhere. Currently, he is an Acharya or spiritual teacher of Chinmaya Mission, and splits his time between the USA and India. Advaita Academy has been sponsoring many of his talks on Vedanta and has made them available on You-tube under Acharya Sadaji. He is also author books, Introduction to Vedanta, three volumes of ‘Journey Beyond: A Non-Dual Approach, available on Amazon, USA, UK and India. He is married to Mrinalini Sadananda, who is a well-known Kuchipudi dancer and Choreographer.