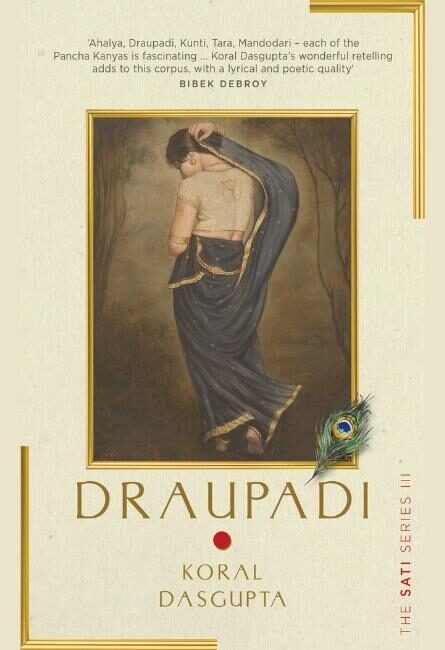 ‘Ahalya, Draupadi, Kunti, Tara, Mandodari – each of the Pancha Kanyas is fascinating ... Koral Dasgupta’s wonderful retelling adds to this corpus, with a lyrical and poetic quality’ BIBEK DEBROY

Draupadi is immortalized as the beloved princess of Panchal and the queen of Indraprastha in Indian myth and legend. Yet what do we really know of the fire-born queen’s dreams? What were her true desires?

In Koral Dasgupta’s thrilling new interpretation, Draupadi’s interior story, often relegated to the margins, is vividly foregrounded – from her unique friendship with Krishna, unconventional marriage to the Pandav brothers, to her quirky relationships with Kunti and Bhishma, and her deep passion for building a loving home. Bold, intimate and immersive, it thrusts the reader straight into the heart and mind of an unforgettable heroine from the Mahabharat, who remains both contemporary and timeless.

In the Sati series, Koral Dasgupta explores the lives of the Pancha Kanyas from the Hindu epics and reinvents them with a feminist consciousness.

Praise for the Sati series

‘A must for those wishing to know about our past and the dialectics of gender within it’ PAVAN K. VARMA

A literary movement founded by her, www.tellmeyourstory.in, hosts short stories and poems written by people across age, professions and geographies. She teaches Marketing, Communications and Creative Writing at Mithibai College. Other than conducting workshops and sessions at colleges and schools, she delivers talks on branding and storytelling. She consults with the corporate in marketing communications and content space; Star India, Harlequin, John Wiley & Sons being few of her clients.

Also, she is an advisory member with CBFC Mumbai.

You will find more about her here : https://tellmeyourstory.in/mentors/koral-dasgupta/

Koral’s first book explains Consumer Behaviour theories (an academic subject from Marketing Management studies) with Shah Rukh Khan as a case study. It is titled “Power of a Common Man : Connecting with Consumers the SRK Way.” The book released in May 2014 and had garnered excellent responses from academic and media personalities across the world.

Her second book is an art fiction. Set amidst the art, music and poetry of Tagore’s Santiniketan,”Fall Winter Collections​”​ is the journey of an orthodox Indian sculptor, as he secretly works on an ambitious project with six mythological Women. The vastness of Santiniketan soon starts working on him, expanding his capacities to accommodate and appreciate the beauty that exists beyond his faith! His life changes in the process of sculpting the sixth Woman of his series. The plot, though a simple love story, is a throwback on the art, music and poetry of Santiniketan. The book is not only the author’s way of reminiscing ​ over the three years she spent at Viswa Bharati, Santiniketan, but is also a conscious attempt to write art fictions where she brings to the world some emotions – expressions – issues of art professionals. Koral writes columns covering artists from various disciplines of visual and performing arts with an aim to report more elaborately the source of their creative energies and the prejudices they have to battle both personally and professionally.