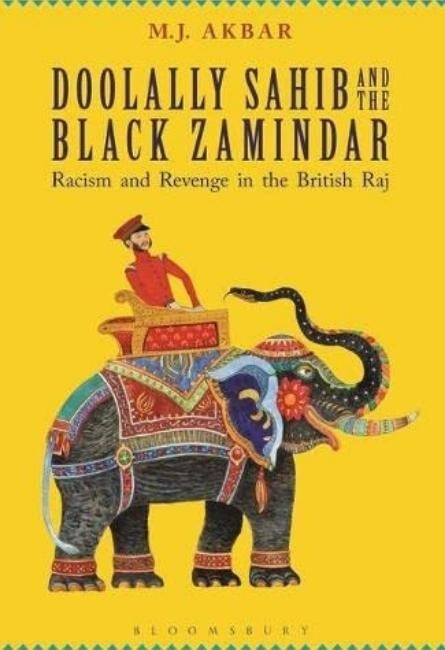 Doolally Sahib and the Black Zamindar: Racism and Revenge in the British Raj

In July 1765 Robert Clive, in a letter to Sir Francis Sykes, compared Gomorrah favourably to Calcutta, then capital of British India. He wrote: 'I will pronounce Calcutta to be one of the most wicked places in the Universe.'Drawing upon the letters, memoirs and journals of traders, travellers, bureaucrats, officials, officers and the occasional bishop, Doolally Sahib and the Black Zamindar is a chronicle of racial relations between Indians and their last foreign invaders, sometimes infuriating but always compelling. A multitude of vignettes, combined with insight and analysis, reveal the deeply ingrained conviction of 'white superiority' that shaped this history. How deep this conviction was is best illustrated by the fact that the British abandoned a large community of their own children because they were born of Indian mothers. The British took pride in being outsiders, even as their exploitative revenue policy turned periodic drought and famine into horrific catastrophes, killing impoverished Indians in millions.There were also marvellous and heart-warming exceptions in this extraordinary panorama, people who transcended racial prejudice and served as a reminder of what might have been had the British made India a second home and merged with its culture instead of treating it as a fortune-hunter's turf.The power was indisputable-the British had lost just one out of 18 wars between 1757 and 1857. Defeated repeatedly on the battlefield, Indians found innovative and amusing ways of giving expression to resentment in household skirmishes, social mores and economic subversion. When Indians tried to imitate the sahibs, they turned into caricatures; when they absorbed the best that the British brought with them, the confluence was positive and productive. But for the most part, subject and ruler lived parallel lives.From the celebrated writer of the bestselling Gandhi's Hinduism, the Struggle Against Jinnah's Islam comes this extensively researched and utterly engrossing book, which is easy to pick up and difficult to put down.

M. J. Akbar is a distinguished writer and Member of Parliament for BJP. During his long career in journalism, he launched, as editor, India’s first weekly political news magazine, Sunday in 1976, and two daily newspapers, The Telegraph in 1982 and The Asian Age in 1994. He has also been editorial director of India Today and The Sunday Guardian.

He first served as an elected Member of Parliament between 1989 and 1991, and returned to public life in March 2014, when he joined the BJP and was appointed a National Spokesperson during the historic general elections that brought the party to office with a simple majority under the leadership of Prime Minister Narendra Modi. In July, 2015 he was elected to the Rajya Sabha from Jharkhand. In July, 2016 he was elected for another term, this time from Madhya Pradesh.

He is also the author of several internationally acclaimed books, including India: The Siege Within; Nehru: The Making of India; Kashmir: Behind the Vale; The Shade of Swords: Jihad and the Conflict between Islam and Christianity; Tinderbox: The Past and Future of Pakistan; and Blood Brothers, a novel. In addition there have been four collections of his columns, reportage and essays.

In 2004, he was named a member of the committee set up by Saudi Arabia’s King Abdullah to draft a ten year charter for Muslim nations at a special conference in Mecca. In March 2006 he joined The Brookings Institution, Washington, as a Visiting Fellow in the Brookings Project on U.S. Policy towards the Islamic world. He also serves as chairman of the trust for the Calcutta Muslim Orphanage.