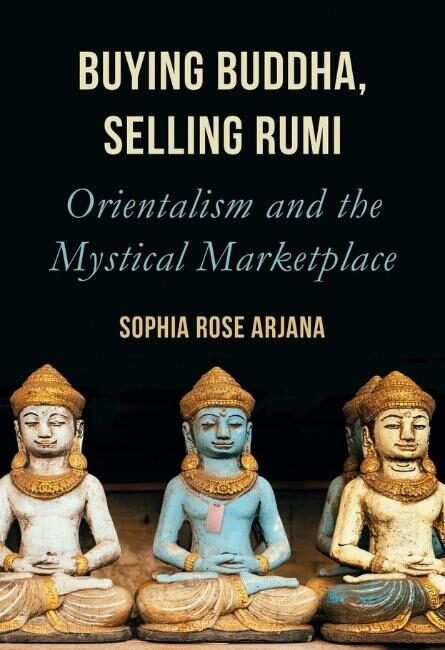 From jewellery to meditation pillows to tourist retreats, religious traditions – especially those of the East – are being commodities as never before. Imitated and rebranded as ‘new age’ or ‘spiritual’, they are marketed to secular Westerners as an answer to suffering in the modern world, The ‘mystical’ and ‘exotic’ East promising a path to enlightenment and inner peace. In buying Buddha, selling Rumi, Sophia rose arjana examines the appropriation and sale of Buddhism, Hinduism and Islam in the West today, the role of mysticism and Orientalism in the religious marketplace, and how the modification of religion impacts peoples lives.

Dr. Sophia Rose Arjana is Associate Professor of Religious Studies in the Department of Philosophy and Religion at Western Kentucky University. She has published articles, book chapters, and books on several subjects in the study of Islam, including pilgrimage, Islamophobia, popular culture, and feminism. These include articles in Shi’a Studies, a journal published by the Centre for Islamic Shi’a Studies in London, an article in ARTS: The Journal of the Society of Arts in Religion and Theological Studies, book chapters on the trope of “Turning Turk” in Orientalist discourse, an article on the film Argo and the representation of Iranians in American film, a book chapter on the political philosophy of Ali Shariati, and more recently, a chapter on religion and popular culture in the United States. Dr. Arjana has also published several several encyclopedia articles on subjects ranging from dreaming in Islam to contemporary Islamophobia. Her first book, Muslims in the Western Imagination (Oxford University Press), examines the history of anti-Muslim rhetoric in Europe and North America. It received accolades from fellow scholars and is being published in an Arabic edition in 2018. Her second book, Pilgrimage in Islam: Traditional and Modern Practices (Oneworld Academic), is a comprehensive study of pilgrimage, ritual, sacred space, and technology in Islam. In November of 2017, Dr. Arjana’s third book was published, a study of Muslim female superheroes, such as Ms. Marvel, Qahera, Raat, and Burka Avenger. This work, titled Veiled Superheroes: Islam, Feminism, and Popular Culture, is published by Lexington Books. Her latest book focuses on the commodification of mysticism in North America and Europe, new age religion and spirituality, and cultural colonialism. Titled Selling Rumi, Buying Buddha: Mysticism in the Modern World, it will be published by Oneworld in August 2020.