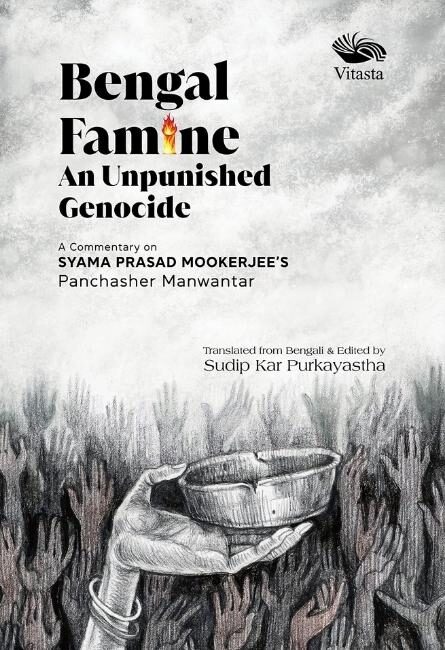 This book is a commentary on the 1944 book Panchasher Manwantar by Syama Prasad Mookerjee, a political stalwart of the time. In his book, Syama Prasad argues that the famine of 1943-44 that is said to have caused the death and displacement of three million people, tearing apart Bengal’s social and economic fabric, was a man-made disaster. The acute food shortage was deliberately created by the Churchill government to punish a rebellious, militant Bengal. The colonial government adopted a ‘scorched-earth’ policy, burned the boats that carried grain, promulgated an anti-hoarding act that prevented farmers and householders from keeping even small buffer stocks, while hoarding by private lobbies was allowed resulting in huge cost rise. This policy was actively supported by the communal practices of the local Muslim League government. Translator Sudip Kar Purkayastha believes this to be a deliberately crafted and ruthlessly implemented policy that resulted in a GENOCIDE of Bengalis and notes that its perpetrators have not yet been called to account.

Dr. Syama Prasad Mookerjee (1901-1953), second son of Sir Asutosh Mookerjee, was a multifaceted personality—educationist, patriot, statesman, parliamentarian, a person of incredible courage and a great humanitarian. In a life of less than fifty-two years and in politics for just fourteen of them, he had risen to be a Union cabinet minister in free India’s first cabinet, and had thrown away that portfolio upon developing serious differences with Jawaharlal Nehru over the pogrom of the Hindu minority in East Pakistan. Before that he had been the driving force behind the creation of West Bengal and East Punjab by snatching these parts from Jinnah’s Pakistan. After resigning his cabinet berth he founded the Bharatiya Jana Sangh, which later metamorphosed itself into the Bharatiya Janata Party (BJP) of today. This volume is a well-researched and complete biography of this great son of motherland India which gives an insight into his inspiring life.

Sudip Kar Purkayastha is an author. His latest book ‘On the Road to Freedom: Footprints on Indian History’ is a two volume work. A former banker and consultant Purkayastha was also the founding editor of ‘Indian Journal of Bank Marketing’. He had written articles in several national dailies & journals.