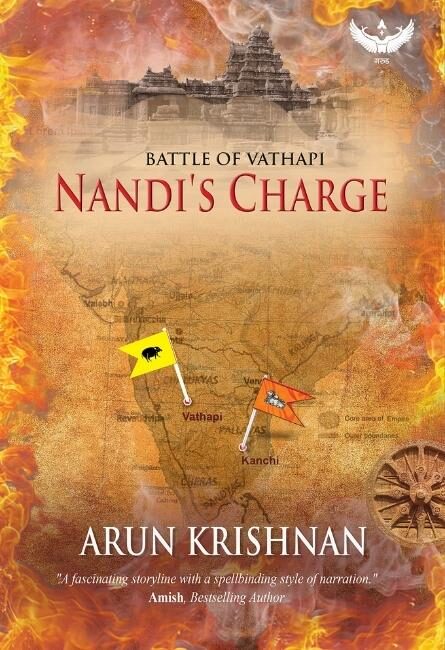 In Nandi’s Charge, the first book of the Battle of Vathapi series, author Arun Krishnan takes us through the riveting tale of preparations on the Pallava side for an eventual campaign against Pulikeshi and the Chalukyas. A young king, Narasimhavarman, is out to keep a promise made to his dying father. Can the young lion keep his word? At the dawn of the 7th century CE, Bharat was a land in ferment, politically, socially and ideologically. It was a time of great religious revival. Santana Dharma was trying to reassert itself with the start of the Bhakti movement in the South. King Harsha at Kannauj, King Pulilekeshi at Vathapi and King Narasimhavarman at Kanchi loomed large over the Indian political horizon at that point.

Arun Krishnan is a writer of Indian origin based in New York City. He is the author of The Loudest Firecracker which was published by Tranquebar Press in India. The book was nominated for the Crosswords Books Award and won favorable reviews from Time Out, The Pioneer and The Hindu.

Arun came to America because the Annenberg School for Communications at the University of Southern California was kind enough to give him a scholarship. As he worked towards his American citizenship, Arun worked in digital marketing for technology companies and non-profits that had operations in America, Asia and Africa.

Arun is also the host of the Learn Hindi from Bollywood Movies Podcast. The podcast has been featured in The Guardian, National Geographic Traveler and the Wall Street Journal.

The podcast and links to other writings can be found at www.cuttingchai.com