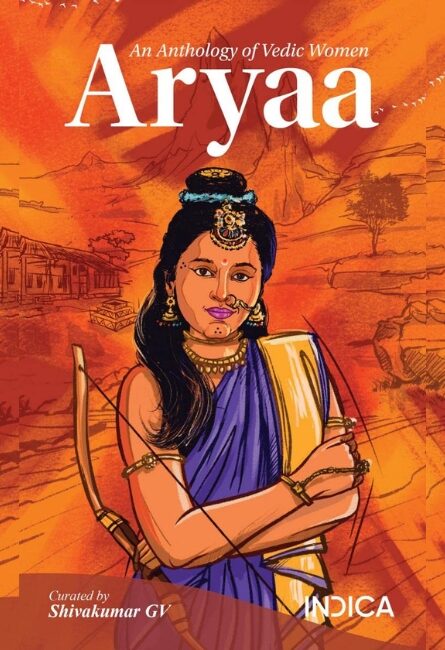 Aryaa : An Anthology of Vedic Women

She chose the life of a warrior, leading from the front, protecting her ancestral kingdom.

She waded through treacherous destiny. Her uncompromising love restored her husband back to glory.

She lived in a hermitage, chose a king as husband, and challenged his dharma in open sabha- a mother who shaped an emperor who reshaped the civilization.

She watched the play of beauty and destruction from afar. When she took centre stage, she nurtured the future to find its feet.

She was regal and virtuous. She embarked on a divine mission, and chose an incredible destiny and groom for herself.

She, a fisherwoman, rose to rule an empire, navigating challenges and making tough decisions with her steely resolve.

She led her life on her own terms, choosing to stay on the sidelines but shaping life at the centre.

She courageously pursued truth, unafraid to challenge the greatest scholars on metaphysics. An inspiration to seekers of all times.

She was the wind beneath her husband’s wings. When he pursued the ultimate truth, she too walked the unyielding path.

She sought an improbable marriage. Her penance and devotion won her heaven, and for her husband too.

She has many faces, different roles in different times, embodying the essence of a great tradition. She carved a niche, charted her own path but upheld Dharma at all times.

She is Aryaa - the glorious woman of Bharatavarsha - manifestation of the eternally present Shakti.

Shivakumar GV is an IT professional in the domain of Learning and Development, with a deep interest in Bharateeya Samskriti. He is part of the Indica fraternity as a Scholar-in-Residence at Indica, Consulting Editor for Indica Today and contributes to Indica Conferences. He is researching on Puranas to create frameworks for application in contemporary times and contributes to Indica Conferences. At IndicA Today he writes on Civilizational narratives, Mahabharata and anchors Kannada content. He is also one of the authors of ”Unsung Valour: Forgotten Wars of Kurukshetra” – curated by SaiSwaroopa Iyer for Indica. Mahabharata, Rigveda, Bharatiya Itihasa-Purana and Civilizational Conflicts are his areas of interest. He is a BTech graduate from National Institute of Technology, Surat and an MTech from IIT Mumbai. He lives in Bangalore with his parents, wife and daughter. He is greatly inspired by the Rivers of India – Saraswatee in particular.