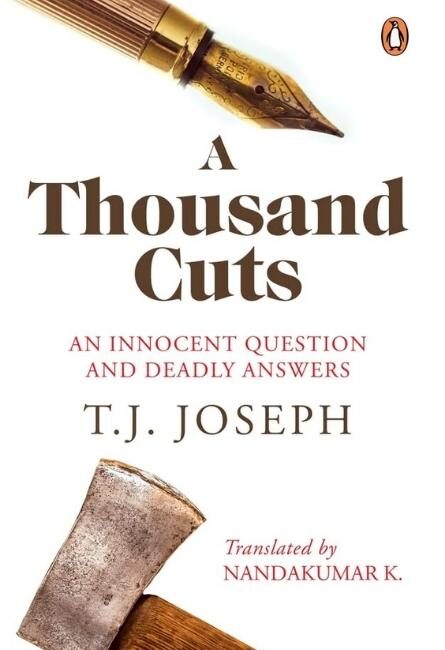 A Thousand Cuts: An Innocent Question and Deadly Answers

A Thousand Cuts is a harrowing, sobering and ultimately inspiring autobiography of Professor T.J. Joseph, who in 2010 became the victim of a brutal terrorist assault, accused of blasphemy after setting an exam question that enraged fundamentalists. This book is an important reminder of the pernicious effect of religious extremism and the duty of every person to speak out against those who would silence free expression' SHASHI THAROOR'There is excruciating agony here, but also black humour and irony that enliven and lighten the narrative even at the height of anguish' K. SATCHIDANANDAN'The poignant tale, with its sense of urgency and helplessness, has been sensitively translated as A Thousand Cuts' RANA SAFVIA chilling account of religious extremismIn 2010, T.J. Joseph, a professor of Malayalam at Newman College, Kerala, framed an innocuous question for an internal examination that changed his life forever. Following a trumped-up charge of blasphemy, members of a radical Islamist organization set upon him in public, viciously maiming him and chopping off his right hand. His memoir, told with amazing restraint and wry humour, is the moving tale of his life and family as they went through hell and beyond. Here's the extraordinary story of a man who survived dismembering only to be betrayed by hisown Church. Let alone stand by him, it robbed him of his livelihood and isolated him from his community, driving Joseph's long-suffering wife to melancholia and eventual suicide. Joseph's story is one of fortitude, will power, forgiveness and compassion, told with rare wit that will make readers chuckle through their tears.This is a tale that will leave the reader seething, weeping and smiling by turns.

T. J. Joseph, a professor of Malayalam at Newman College, Thodupuzha, a Christian minority institution affiliated with Mahatma Gandhi University had his hand cut off at the wrist on allegation of blasphemy, by members of Popular Front of India, an Islamic organisation in India.